Twice a year, some eight million Purple Martins migrate through southeast Louisiana, the first as a final "refueling" stop before the long flight to South America, and again as their first chance to refuel on the way back. A flight for some that can be as long as 8,500 miles.

More than 200,000 of these spectacular birds have adopted the under-structure of the southern end of Lake Pontchartrain Causeway

as their evening roosting area during the spring and summer months. At dusk each evening, the swallows swoop and dance, sing and provide a natural, breathtaking spectacle.

Scientists at Louisiana State University estimate that more than fifty percent of all North America's migratory birds pass through this area, the center of the great Mississippi River Flyway, twice a year. As more and more en route habitat is lost to development, a Sanctuary at this point becomes even more important.


During the summer there were as many as 3,000 spectators each evening along the Lake shoreline near the Causeway; an event which has created demands for crowd control, safety measures, more adequate viewing space and facilities for protecting, caring for, and explaining the phenomenon of the birds.

Project Swallow initiated the "Save the Swallows" program which enlisted the help of the Causeway Management to erect 6,700 feet of fencing to eliminate collisions between automobiles and birds at both ends of the Causeway. Prior to this construction, it was estimated that 12,000 birds per year were being killed by automobiles.

A refuge at the south end of the Causeway will accomplish three things: 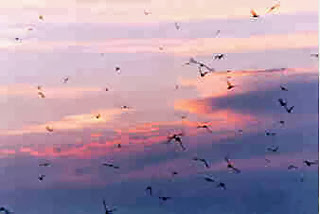 SUMMARY
The proposed Sanctuary is a good environmental and conservation project. The Purple Martin is America's favorite bird but their numbers are declining - they need protection. The project will create new wetlands that will provide a haven for the swallow and a refuge for all migratory birds. It will aid in the environmental improvement of Lake Pontchartrain while protecting a unique natural resource, the tremendous Purple Martin roost.

The project has received great public support. Not only from the crowds of spectators, some evenings numbering as many as 3,000, but from national organizations and state and local governments. It is a family oriented, tourist and educational attraction offering the public a unique opportunity to appreciate and enjoy nature.

It is economically beneficial and it will create a world class bird Sanctuary on the edge of the largest fresh-water estuary in the world at the base of the longest bridge in the world.