National WildBird Refuge, Inc. (Project Swallow) is governed by a voluntary Board of Directors composed of a group of outstanding business and civic leaders. Their expertise covers a broad spectrum. Included are lawyers, doctors, engineers, geologists, business owners, community activists, certified public accountants, and veterinarians. A thumbnail description of our president is as follows: 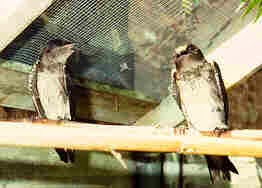 Carlyle Rogillio grew up in John James Audubon country, West Feliciana Parish, LA., where Audubon's works and the area's bird life inspired an early interest in birds. He graduated from Louisiana State University as an engineer, but maintained his interest in birds throughout his career. He admits that sometimes his avocation takes precedence over his vocation.
His engineering pursuits led him to the petroleum industry, where he held various domestic and foreign assignments before going into business for himself.

The interest in Purple Martins led Carlyle to discover the roosting site of the birds at the Lake Pontchartrain Causeway. It is one of the largest known flocks of Purple Martins in the world. Because they are a declining species and need protection, Carlyle founded Project Swallow and began to devise a plan to protect them.