The largest of the swallow family, the Purple Martin is famous both for its song and its graceful flight. Entitled "America's Most Wanted Bird" by the Nature Society, they are found in man-made Purple Martin houses in backyards throughout most of the United States and Canada.

The Purple Martin is the first migratory bird to arrive in the New Orleans area in late January. Their numbers increase continually throughout the spring until they peak in the summer and begin their migration to Brazil and Argentina for the winter. The last birds leave in November.

Being "cavity nesters", virtually all Purple Martins are raised in man-made housing. Each one is someone's little bird. And each one represents someone's investment in time, money and care.

In addition to their beautiful song and graceful flight, perhaps their most useful attribute is that they feed only on flying insects. The Purple Martin, and their swallow family, eat thousands of tons of insects every year. They significantly reduce our "misery index", increase agricultural yields, and greatly reduce the amounts of harmful pesticides needed for insect control.

Local Purple Martins leave their houses at night and roost at the Causeway for safety. It is estimated that the local birds come from more than thirty miles away (or from the surrounding one thousand square mile area). By coming to the Causeway and roosting over the water where there are no predators, the birds have a greater chance of survival. During spring and fall, great numbers of migratory Purple Martins benefit from the safety of the Causeway roost. 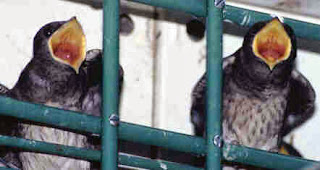