Caring For a Purple Martin Colony

Most Purple Martin landlords care about and want to help their colony. This means providing good, safe homes for the adults to stay in and raise their young.

One way to judge the quality of your martin home is by the production of young birds. The goal should be to attract as many adults as possible and to fledge an average of four healthy babies per nest. Some couples may only fledge two, while others will raise five, and sometimes six.

In order to average four healthy babies per nest, it will mean providing as best you can for your birds, from the time the adults arrive until the last baby leaves the nest.

First, you cannot buy a better house than those made by Nature House.1  They have many advantages: they are reflective and well ventilated, making them cooler than most houses in hot weather. They are dryer in wet weather and more parasite resistant. They are easy to lower and raise, and have doors that are easily opened. Both of the latter are important for being able to check on and to provide for adults and young alike.

Many of the plastic and wooden houses that are for sale aren't fit for birds to stay in, and especially not for raising their young. Some very good martin landlords use wooden houses and gourds successfully, but it takes a lot of work to overcome their disadvantages. I grew up with martins in wooden houses, and I've used gourds. But I find Nature House products superior to any otherhousing. If you do use wooden houses or gourds, be sure to paint them white to reflect the heat. Also, provide adequate ventilation and drain holes.

I add porch dividers to my houses - either those made by Nature House or homemade. I've found they increase occupancy rates and prevent compartment crossovers by the babies.

Quite often, the first adults arrive too early and suffer the distress of cold weather. There are several things that can be done to help them through this period. Metal floors are cold. To offset this, put pine straw (also called pine-needles) in the bottom of the compartments. The pine straw is a natural nesting material that the Purple Martins often choose themselves, and it makes the floor much warmer. The difference would be like standing barefoot on a cold metal floor or on a carpet.

It is best not to use any floor covering that will become wet and soggy after a rain. Wet floors will be bad for the adults, but later, even worse for the babies. The Purple Martins choose nesting material that will drain and dry quickly. 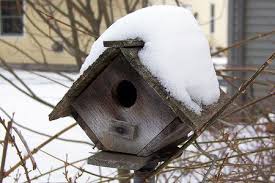 On cold nights, many birds will crowd into one compartment to take advantage of their combined body heat and conserve energy. Another tactic that I have used to good advantage is to provide a sixty or seventy-five watt light bulb for heat. The socket and cord should be weather proof. Place the bulb in one of the compartments, and the heat from it will warm the surrounding compartments.
If worse comes to worse, and the birds become weak from lack of food, take them down and feed them according to our "Purple Martin Rehabilitation" 2  manual.

Provide eggshells for the birds. While there is little or no nutritional value in eggshells, it does supplement the calcium requirements their bodies need.

If you can, teach your birds to eat meal-worms prior to any bad weather. It takes a while for the Purple Martins to learn that meal-worms are a good food. Then, the other martins learn from watching the initial birds feed. Ed Donath and a number of others have saved their colonies by feeding meal-worms.

Protect your martins from house sparrows and starlings. There is no way to have a successful martin colony if sparrows are allowed to nest in the boxes also.

Sparrows are public enemy number one in the bird world. They are belligerent, malicious birds. One couple has been known to ruin a whole house full of eggs by pipping or throwing out every egg in the house. They have also been reported to have pecked babies on the head, killing them and moved in, building their nests on top of the dead babies. 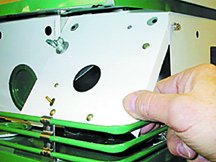 An effective method of sparrow control is by trapping. The Spare-O-Door, that fits into the Nature House compartments, is very good. Sometimes, I leave my houses up year round with one or two of the Spare-O-Doors installed and door stops in the rest of the compartments. By trapping during the non-martin season, most of the sparrows become wary of the houses and are not as much of a problem during the martin season.

Once the martins lay the first egg, many landlords take the Spare-O-Doors down (others leave the traps in a seldom used, by martins, center compartment). Then, the landlords advocate using a good, scope-equipped pellet gun. From the time the first martin egg is laid, the life or potential life of a baby martin is in danger every time a sparrow lands on your house.

For starling problems, the best solution is to use the McEwen, starling-resistant openings. This can be done by converting the round 2-1/8" openings to the 1-3/16" X 3" crescent shaped openings (the upper, 1-3/16" part of a 3" circle). Purple Martins can enter easily, but when the crescent shaped entrances are placed ¼" above the floor, the long-legged starlings cannot.

If sparrows or starlings do get started, remove their nests and trap or shoot the offenders as soon as possible.

Diatomaceous earth is an effective method of controlling nest parasites. I would not recommend the use of any pesticides. Because of a bird's ability to absorb and store the pesticides in their bodies, it endangers their lives after they leave the nest.

If the mite infestation becomes bad (the mites feed on the birds, but live in the nesting material), remove the infested nesting material and replace it with new nesting material. Small sticks (pine straw is very good), or other material that will dry quickly after a rain, are all good. 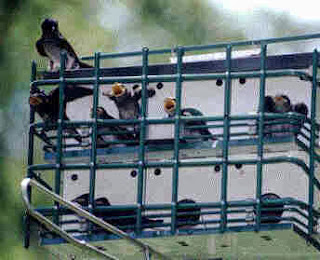 You might want to help the young couples, who often do a poor job of nest building, to build a mud barrier across their doorways. This may be an important defense mechanism to discourage predators from reaching in and destroying the eggs and babies, and to keep the eggs and young from falling out.

It is also essential to place additional nesting material in any nest where the bottom isn't well covered. This will improve hatching success and provide a better environment for the babies.

The nests should be checked at least once per week. The eggs and the babies can be handled without fear of the parents abandoning the nest or the colony. In addition to the nest care already mentioned above, check the number of eggs, the babies and their growth.

Quite often an egg will hatch later than the rest, resulting in a younger and much smaller baby than the others. Because of his smaller size, he is at a disadvantage when competing with his larger siblings for food. The size differential will widen with time, and the smaller bird will become weak from malnutrition and die. This can be prevented, as smaller babies will usually thrive if placed in another nest with babies that are their own size. It is best not to place the little one in a nest that already has five or six babies. Choose an adult pair's nest with four or fewer babies. 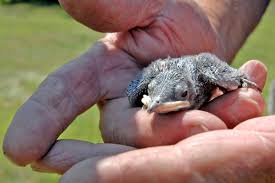 Normally, the babies fledge at twenty-eight days. After they are twenty-two days old, they can fly for short distances, but can't sustain flight. From this age on, they become increasingly more likely to jump from the nest if disturbed. Unless special precautions (stuffing a sock in the doorway with a string that will reach the ground, once the house is raised the sock can be removed without disturbing the older babies) are taken to avoid premature fledging, nest checks should cease at this stage.

Good luck! Let us hear of your problems and your successes.
Carlyle Rogillio

"Project Swallow" is a project of the National WildBird Refuge,
a tax-exempt, nonprofit corporation.